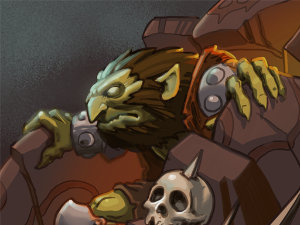 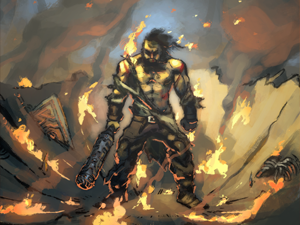 For 3 rounds, damage dealt to enchanted unit is reduced to 1. 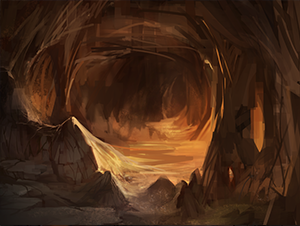 When a Gravelock you control is dealt damage, your other Gravelocks get +1 Attack until end of your turn. 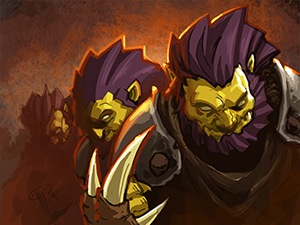 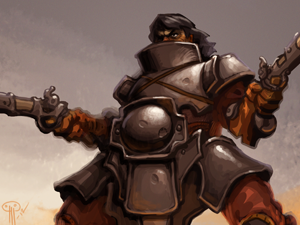 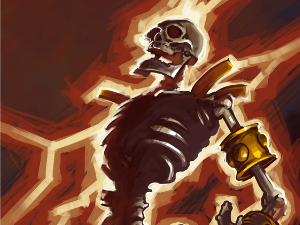 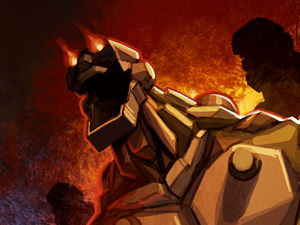 All units have their Countdown decreased by 1. 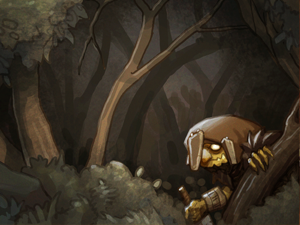 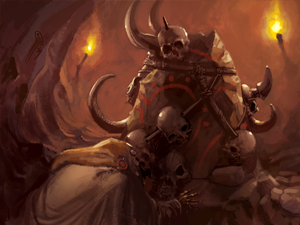 At the beginning of your turns, increase [current] Energy by 2. 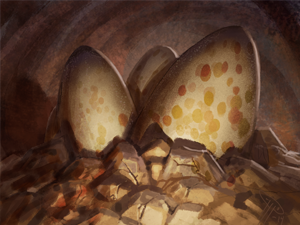 Pay 2 Energy: [Sift] 2 Gravelocks from your library, and draw 1 of them. Use this ability only if you have 0 scrolls in hand. 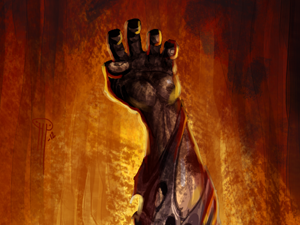 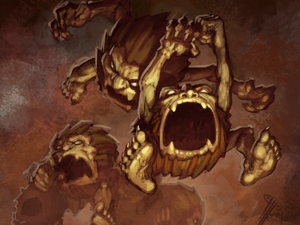 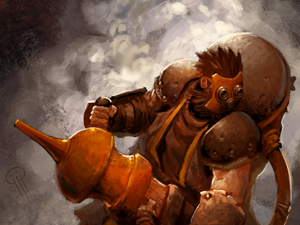 Tempest Reaver's Attack is increased by your [current] Energy resource. 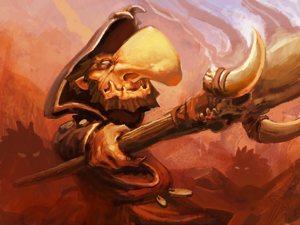 When Uhu's Countdown is 0, you may reset its Countdown to increase [current] Energy by the number of Gravelocks you control. 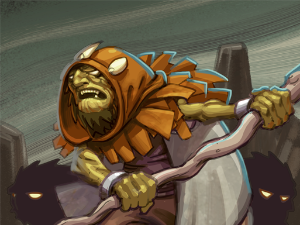 Other Gravelocks you control have +1 Health. 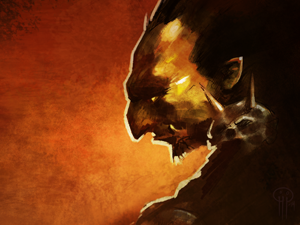 When another Gravelock you control takes damage, Gravelock Freak's Countdown is decreased by 1. 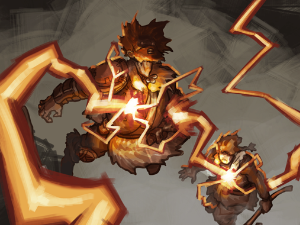 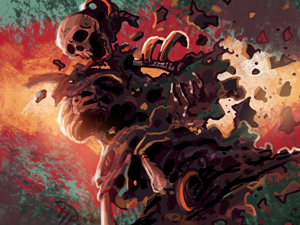 To be frank...I didn't like Gravelocks at all pre-Elder nerf. They Elder snowball effect was quite a bit OP and they could dominate from the mid-game. I think currently Gravelocks work best as a late game deck. My deck attempts to capitalize on their defensive potential to carry them into the late game and pick up the offense later on with Scrolls such as Gravelock Burrows active.

Yes, they're mostly Gravelocks, because this is a Gravelock deck..but I'll give a bit more detail where I can.

Gravelock Raider: I used to not play it as a turn 1 drop because of its weak stats and would only drop it as a cheap wall after elders/freaks were out. Lately though I've been having some success dropping it turn 1. Yes, it will die easy (the curse of the 1 drop grunts), but the 1 attack is useful for bringing your opponent's early drops into spark/burn range. Great sift choice for sac fodder with Snargl Omelette.

Gravelock Guard: Standard 2 drop stats, the pillage ability is very nice. Like raider, the ability can help put a lot of early drops into spark/burn range. Pay attention to its positioning later in the game as it can be very important when the pillage activates in your attack order so that it's most effective.

Gravelock Outcast: I've had some builds where I run Gravehawk, which allows me to sac for growth so I can use outcasts ability as well. That's fine in a more offensive build in this deck, but since I want as much defense as possible I'm sticking with mono-energy all the way. This sadly means that Outcast is here just to be a 3 drop creature.

Lockling Brood: Great against Growth, since many growth decks don't run offensive enchantments/spells, which means they'll have to waste one they intended for their creature...if they run them at all. Not great against Order unless you're on equal ground or slightly ahead. Takes the value out of burn against Energy since they won't get the card draw from it. Combos well with fury. Only needs one turn of attack (or to waste a valuable opponent spell) to get its value back. Anything more than that is a welcome bonus.

Uhu Longnose: Only running two because it's a unique. If he's out and I have decent field presence then I can focus on sac'ing for Scrolls and let him take care of the resources. Combos well with Snargl Omelette and Tempest Reaver in this deck.

Gravelock Elder: Still the most essential creature in this deck! A lot of players seem torn on this creature. Some think the nerf hit it too hard. Some think it should've kept the attack buff and lost the health buff. I think Elder is in just the right place, and that health is a lot more essential than attack in this deck and Scrolls in general. Having just one on the field robs the value out of a lot of opponent plays, and instantly gives you more value per-gravelock that is cast because of the health boost. Its ability helps you make it to the late game, which is where this deck shines.

Gravelock Freak: I would love an attack buff up to 4 for freak, but it's still great. Its ability and high survivability are very essential. Does decent if it's the target of an Arby/Tempo theft play because it counts back down very quickly. I usually keep this in my starting hand if I also have a skull shrine because it allows him to come out on turn 4.

Tempest Reaver: Saved this for last as its the odd-man out. I put him in at first because there's just too few creatures in this deck with only Gravelocks. I found the Reaver to be the most diverse addition. His defense helps a lot. It also helps ramp due to its ability encouraging you to keep piling resources. This deck usually goes up to about 10 resources, so it can be an instantly idol snipe if your opponent doesn't respect it. Combos well with Uhu/Skull Shrine in this deck.

Plating: Again, more defense! In one version of this deck I used the replenish to cast Gravehawk out, so it's versatile as a splash scroll if need be. The replenish can help a lot by paying for an Omelette sift.

Spells:
Gravelock Burrows: I use this strictly as a late game Scroll and usually sac them very early on. Once your board is established in the mid/late game, Gravelock Burrows gives you your finishing power. Will provide IMMENSE value against AOE damage spells (i.e. quake, thunder surge), and poison plays. On occassion I've even Thunder Surge'd my own Gravelocks for the win..you will essentially get +1 attack on every attacking Gravelock for every Gravelock that was hit.

Spark:
Useful for taking out those pesky early drops.

Fury:
Only running 2 as it tends to be quite situational. Mainly useful in the late game to synch up your attack once your board is already established.

Skull Shrine:
Only 2 of these as it tends to fall off in usefulness come late game for me. Normally even though I have this up and running I will continue to sac for resources, whereas I've seen many just sac for Scrolls while it's active. With this deck I want as many resources as possible even after Skull Shrine deactivates to continue casting my high cost drops. While it's active it also helps boost Tempest Reaver attack and gives you extra resources to activate your Omelette.

VD:
Only running two because I find it to be a little situational in this current meta. Many of the big creature plays are from the hand...meaning you need to be as proactive in beefing up your defense as possible BEFORE they hit the field. Also a lot of aggro decks in play, which don't rely on too many VD-worthy creatures...Thunder Surge is better against those decks.

Structures:
SNARGL OMELETTE: I've tried gravelock decks without Snargl Omeltte in them...and frankly they didn't work out. This may just be the most essential Scroll in this deck. Learning how to ramp effectively with this takes some practice, but helps you keep your field presence/card advantage up if done correctly. If all else fails, trust in the Omelette!